skip to main | skip to sidebar

Some buildings are what they are. Others are only what they appear to be.

The former are ducks. The others are decorated sheds.

When taken at face value, neither of these terms are excessively endearing. But they were never intended as judgments. Just observations. They are not measures of quality or worth or of ingenuity. Just categorizations. Slightly esoteric categorizations, but when understood, can really shed light on the candor and integrity of a piece of architecture.

The terms “duck” and “decorated shed” were codified in the 1972 book Learning from Las Vegas by Robert Venturi, his wife Denise Scott Brown, and their friend Steven Izenour. The book argues that there are two distinctly different types of buildings and that all buildings can be classified as one or the other. 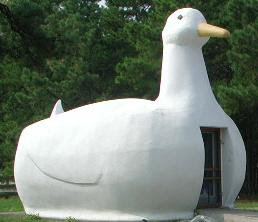 Ducks (aptly named after the duck-shaped roadside building in Eastern Long Island that was originally used to sell ducks and eggs) are symbols themselves. They are buildings that can't be anything but what they are as their shape foretells the activity taking place inside. They do not require signs, often blurring the line between building and sculpture. Ducks have innate ornamentation and are straightforward and honest in their intentions. What you see is what you get, and what you get is what you would expect.

In contrast, a decorated shed is a generic structure with a purpose identifiable only by its signage. In fact, decorated sheds could not exist without signs and other applied ornamentation. Unlike ducks, they are not symbols themselves, but require applied symbols. The ornamentation is explicit and serves to distract the viewer from true structure. Is it a clothing store, a restaurant, or a hotel? Just check the sign.

So is New York a city of ducks or decorated sheds? I think the obvious answer is that it is a city of decorated sheds. We readily identify the Chase bank on the corner as a bank because of the “Chase” sign and that trademark blue logo made up four geometric wedges that has become synonymous with its name. There is nothing about the glass box structures of the buildings themselves that allow us to identify them as banks. The applied ornament 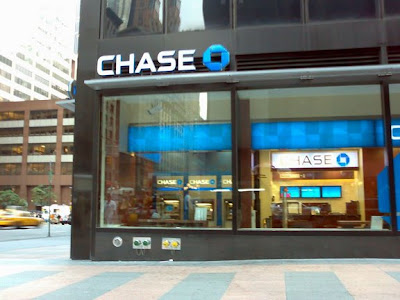 (the name and logo) defines the building, not the architecture itself.

In a schizophrenic city such as New York, decorated sheds make economic sense. If one business decides to close its doors, we can remove the sign and add another. No additional construction necessary (just no more Starbucks please -- 171 is enough). But no great architect really wants to design decorated sheds. Architects enter the profession to design ducks, to design buildings that take on great meaning without applied ornament. Decorated sheds lack a certain romantic quality. They are generic. Cookie cutter. A dime a dozen. 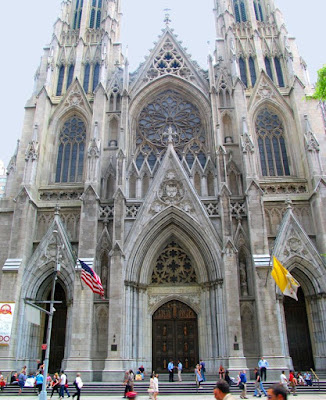 uck and decorated shed. St. Patrick’s Cathedral, for example, represents one of the great ducks of New York. The cathedral was constructed in the classic Gothic style

that was typical of thirteenth and fourteenth century Europe. It can be classified as a duck because it’s form literally represents the form of the Latin cross. With its transepts and nave, the structure could not be mistaken for any other purpose but a church. The ornamentation, too, is not “applied.” Instead, it is an innate and very natural part of the structure.

Though the distinction is not always crystal clear, here is a quick list of some of the other New York ducks that come to mind: Grand Central Station, the Statue of Liberty, the Brownstone House on 72nd near Central Park, TWA airport terminal at JFK Intl Airport, and the Washington Square Park Arch. I would love to hear of anymore you can think of.
Posted by Michael Sloyer at 4:22 PM